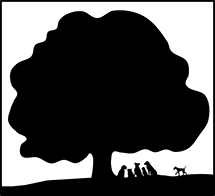 Here is the very first dialogue from the book plus a later one. Enjoy!

The Dogs were talking. As usual, they were sitting around the base of the old oak tree in the early evening.

There was Whitman, a Springer Spaniel, who - having been named after an American poet - affected an air of quiet superiority and tended to lead the discussion.

Anton, a Beagle, who rather fancied himself as Whitman’s Number Two.

Then came Pippa, an exuberant and irrepressible Boxer bitch; Butch, a down-to-earth Staffordshire Bull Terrier; and Malcolm, a well-bred and quietly-spoken Red Setter.

Lastly there was Obi, a young Boxer, not long out of his puppy days.

This particular evening, their topic was Evolution.

“So how did we evolve?” asked Pippa, “I mean, there are so many different breeds.”

“It’s widely accepted,” said Whitman, “that all Dogs are descended from Wolves.”

“What are Wolves?” asked Obi.

“Think of them as German Shepherds who’d like to eat you,” said Malcolm.

“No change there then,” said Butch, but quietly, since he always felt just a tiny bit awed in the presence of dogs with names like Whitman and Anton. (‘Butch!’ for heaven’s sake - what were his Owners thinking of?)

“But we don’t all look like Wolves,” said Pippa, “how did that happen?”

“Well,” said Whitman, “in our Great Project to help the Owners, we specialised. Some of us grew large and powerful to tackle Wild Beasts - ”

Pippa and Obi looked round the group proudly.

“ - some of us developed enormous stamina to pursue Foxes and Deer - ”

Whitman and Malcolm nodded to each other.

“ - and some of us developed mighty chests and locking jaws to hold on in a tight spot and never let go."

Butch puffed out his chest.

“But whatever our individual differences - our specialisations - deep inside us all, there is still the Inner Wolf – our Common Ancestor,” concluded Whitman.

Pippa threw back her head and howled.

“There’s a French Poodle, lives down our street,” said Butch. “But I think he lost contact with his Inner Wolf some time ago”

The Dogs were talking. As usual, they were sitting around the base of the old oak tree in the early evening.

Pippa arrived last. “How do I look?” she asked.

“Um…like you did yesterday?” Anton replied, “but why do you ask such a strange question?”

“Well,” replied Pippa, “my Female Owner is always saying this to the Male one.”

“Ah,” said Whitman, “this must be all about clothes. You see, Owners are not as fortunate as we Dogs, born as we are with perfectly suitable coats. They have no natural covering.”

“But why do they need so many?” Pippa asked. “My Female is always throwing open her wardrobe - which is totally stuffed with clothes - and saying ‘I have nothing to wear,' ”

“I think,” said Whitman, “you may be referring to fashion.”

Whitman thought for a moment.

“Fashion,” he said finally, “seems to be a system the Owners evolved for making themselves unhappy about the clothes they already have.”

The Dogs fell silent, marvelling at the sophistication of the Owners.

“I must confess to a sneaky liking for my Owner’s cashmere sweater,” said Butch.

“Cashmere sweater?” said Malcolm, shocked. “You don’t wear it do you?”

“Of course not,” Butch replied, looking ever-so-slightly offended, “but it makes great bedding.”